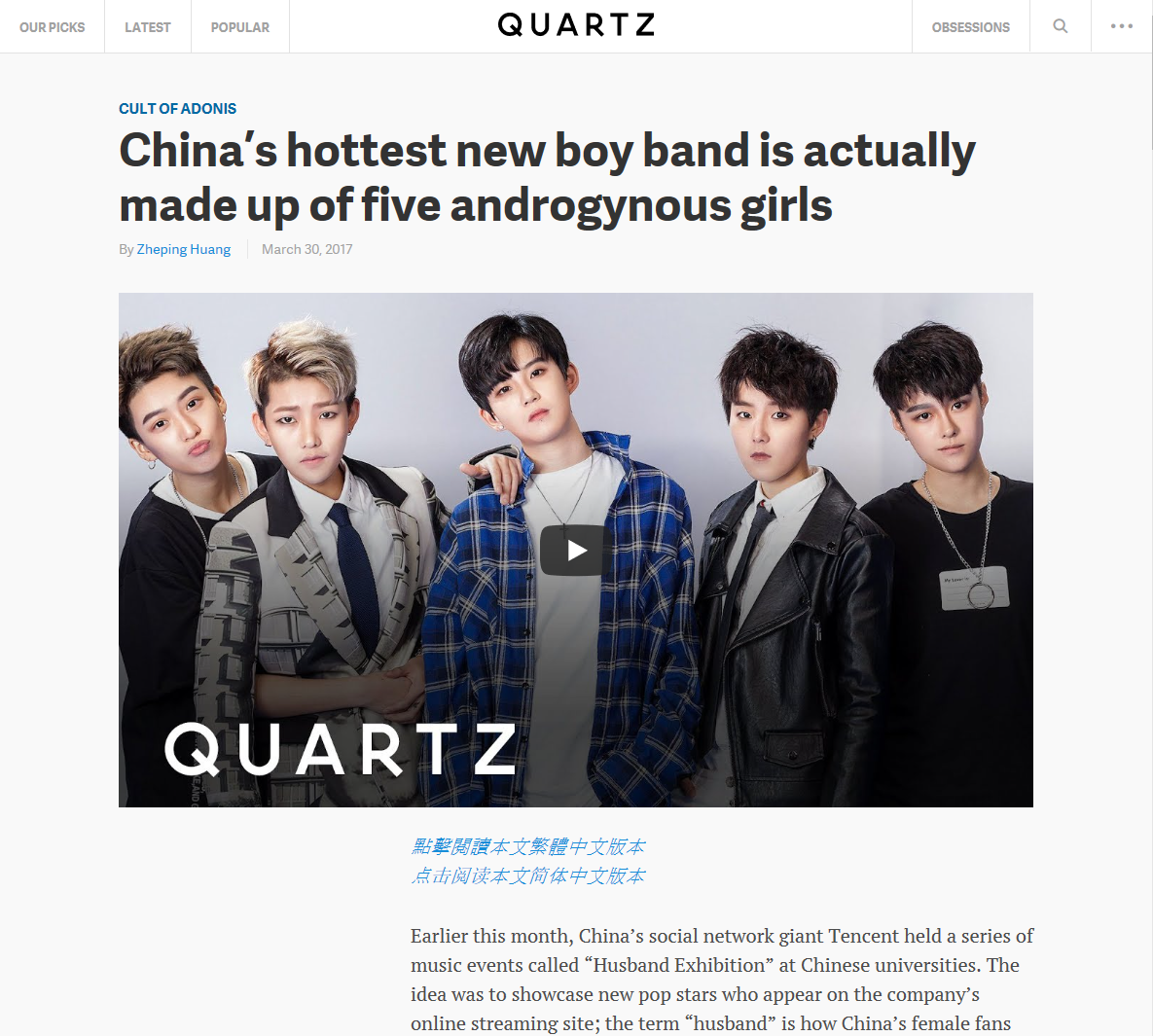 Earlier this month, China’s social network giant Tencent held a series of music events called “Husband Exhibition” at Chinese universities. The idea was to showcase new pop stars who appear on the company’s online streaming site; the term “husband” is how China’s female fans refer to male pop stars who are so charming they fantasize about marrying them.

Enter Acrush, a hot new “boy band” that performed at the tour’s last stop in southern Zhejiang province, where the group is based.

They had one big surprise in store for fans: They’re not actually male.

Acrush is made up of five women mostly in their early twenties, who all have edgy short hairstyles and dress like a bunch of boyish hearthrobs. The group won’t formally debut with a music video until the end of April. But it has already garnered a big fan base after several appearances at music events. Its fan page (link in Chinese) on China’s Twitter-equivalent Weibo now has nearly 900,000 followers. By comparison, Katy Perry, also a big name in China, has about one million Weibo followers.

Acrush fills an unusual niche in China’s homegrown boy or girl bands scene, where girl bands have been shaped by the influence of J-pop, which can involve knee socks, pony tails and other symbols of girlish cuteness. The letter “A” in the name stands for Adonis, a god in Greek mythology known as the epitome of male beauty, says the group’s agent Zhou Xiaobai in a phone interview with Quartz.

In China, women dressing up like men has become a more common sight and more accepted by society in recent years. That’s in part thanks to pop idol Li Yuchun, dubbed the mother of the unisex look in China. After Li won the nationwide talent show “Super Girl” in 2005, more boyish girls popped up on TV, but none of them became superstars like Li.

China’s talent agents have been talking about forming an androgynous band for years ever since Li’s success, Zhou says, but few women wanted to take the risk. Zhou’s search for unisex stars across the country began last March. In September, the 28-year-old agent narrowed down the target to 10 candidates. After two months’ training, Lu Keran, An Junxi, Peng Xichen, Min Junqian and Lin Fan emerged as the five members of Acrush. The youngest is 18-year-old Lin from southwestern Sichuan province.

Fans are predominantly female, Zhou says, ranging from teenagers to recent college graduates. They like Acrush more than equally handsome boy bands, she says, because the five members can understand them better, which is particularly important in one-on-one interactions with fans. “I ask them to reply every WeChat and Weibo message,” says Zhou. “They need to show gratitude [to fans].”

Zhou says they will avoid using the word “boy” or “girl” when introducing the group. Instead, they have carefully chosen a gender-free phrase, meishaonian, or “handsome youths.” But still, female fans on Weibo have taken to calling them “husbands,” a meme usually reserved for male celebrities like Justin Bieber.

21-year-old Lu, captain of Acrush, says some female fans send love letters to her, but “of course I won’t like fans back.” She says the company doesn’t allow her to discuss her own or her teammates’ sexual orientations.

Around 15% of Acrush’s Weibo followers are so-called “anti-fans,” Zhou says, who follow them solely for the purpose of railing against them because of their boyish looks. Lu says she doesn’t really care about the trolls, “as long as they are happy.”

The five members have been dressing like boys in their daily lives long before they took to the stage, Zhou says. Lu has been wearing short hair since she started to learn fencing at around age ten. She recalls that in her childhood she got routine checks before going into public women’s restrooms, with people calling her “little boy.” The situation is less common these days, she says.

With the exploding popularity of The Fighting Boys, a group of three wholesome teenage boys who sing about homework and patriotism, Chinese entertainment companies have revived their hopes of producing megastar homegrown boy or girl bands in a market that has long been dominated by their Korean and Japanese counterparts.

Behind Acrush is Zhejiang Huati Culture Communication Co. Ltd, an entertainment startup founded in 2016 in Tencent’s business incubator in Jinhua, a small southeastern city best known for ham. Huati adopts the same star-producing system that has proven a success in Korea. The company recruits trainees across the nation and selects them to debut as part of a boy or girl group. Aside from Acrush, Huati will roll out three other girl groups between April and May, says Wang Tianhai, the company’s head.

While those groups will have different styles, androgynous or sexy, Wang says, they are all bundled into a brand called Fantasy Football Confederation (link in Chinese). So for example, Acrush is formally known as “FFC-Acrush.” All FFC members have to learn play soccer, and make it part of their stage performances. Wang says playing sports can make the point that his pop stars are “sunny, healthy, and full of positive energy.” He says he has chosen soccer partly because the government has placed great emphasis on the sport.

Lu had never played soccer before joining Acrush. But she enjoys the training, “even as we get injuries sometimes.”